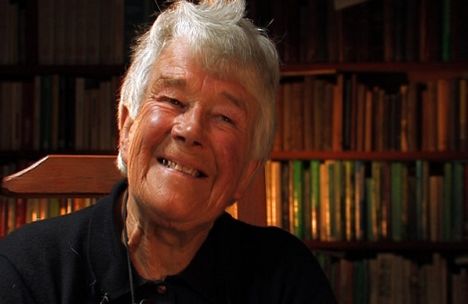 Dervla Murphy (born November 28, 1931, Ireland) is an Irish touring cyclist and author of adventure travel books for over 40 years.

Murphy is best known for her 1965 book Full Tilt: Ireland to India With a Bicycle, about an overland cycling trip through Europe, Iran, Afghanistan, Pakistan and India. She followed this by volunteering with Tibetan refugees in India and Nepal, and trekking with a mule through Ethiopia. Murphy took a break from travel writing following the birth of her daughter, and then wrote about her travels with Rachel in India, Pakistan, South America, Madagascar and Cameroon. She later wrote about her solo trips through Romania, Africa, Laos, the states of the former Yugoslavia, and Siberia. In 2005 she visited Cuba with her daughter and three granddaughters.

Murphy has normally traveled alone and unaided, without luxuries and depending on the hospitality of local people. She has been in dangerous situations; for example, she was attacked by wolves in the former Yugoslavia, threatened by soldiers in Ethiopia, and robbed in Siberia. However, she described her worst incident as tripping over cats at home and shattering her left arm.

Recommend this page to others